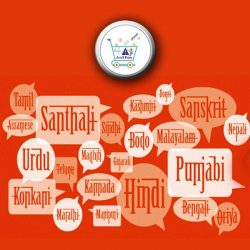 A regional language is a language spoken in an area that is part of a larger nation state. Internationally, the European Charter for Regional or Minority Languages, “regional or minority languages” means languages that are: different from the official language(s) of that State.

India, a potpourri of different cultures, religions and beliefs, is home to not just one or two languages but to an uncountable number of different lingual families. Languages belonging to the two major language families – Indo Aryan and Dravidian – are spoken by more than 90% of the people of India. Know more about the languages of India with India Language Map.

According to Ethnologue, India is considered to be home to 461 languages, out of which 14 have been reported to be extinct.
But still there is not a single Indian language that is spoken across its length and breadth. Hindi is spoken by a majority of North Indians, but it is not a popular means of communication in the southern part of India. Similarly, South Indian languages such as Tamil, Telugu, Kannada and Malayalam are not understood by the people of North India.
For the convenience of people, the Constitution of India has recognised 22 languages in the eighth schedule. These are known as Scheduled Languages and constitute the major languages of the country. India Language Map provides detailed information about these languages listed in Schedule VIII of the Constitution and spoken in different parts of the country.

The list of some of the Indian languages includes:

As per Articles 344(1) and 351 of the Indian Constitution, the eighth schedule includes the recognition of the following 22 languages: